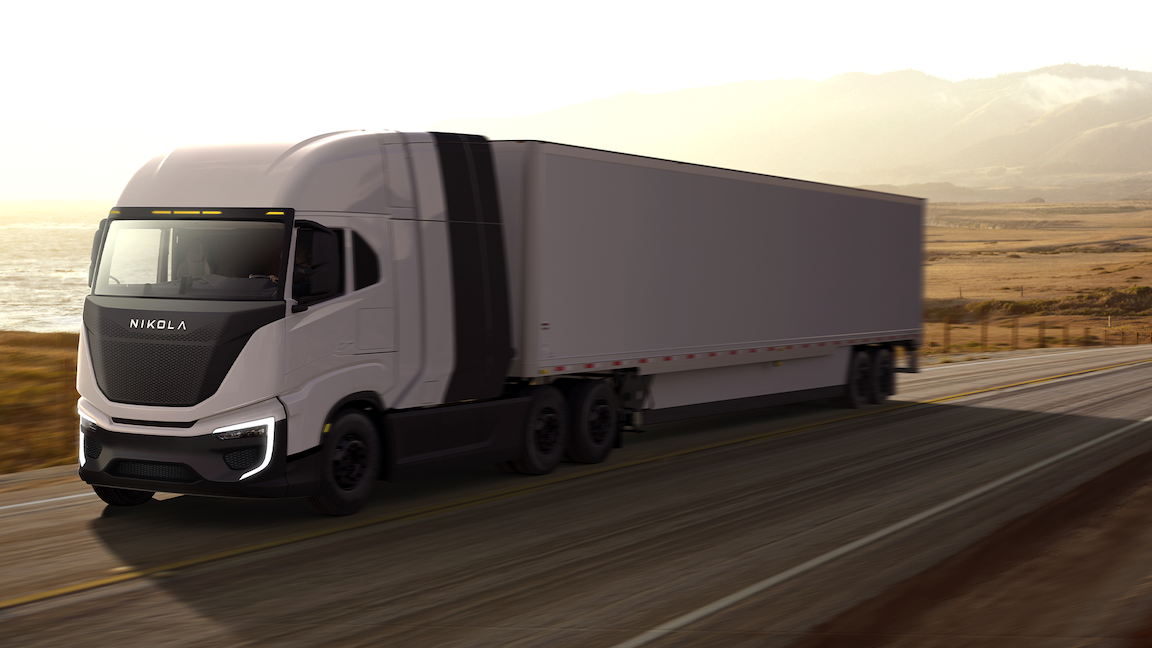 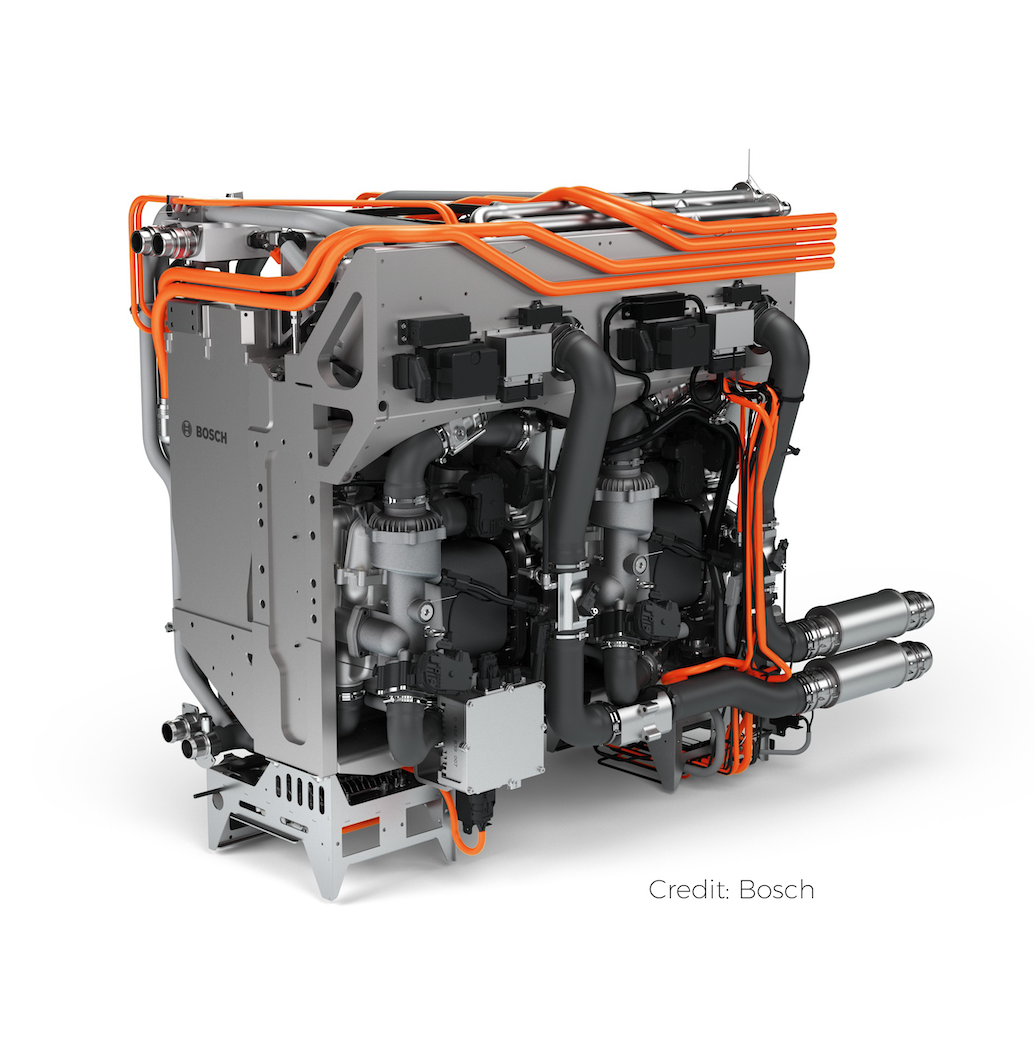 Nikola and Bosch have defined together a scalable and modular approach for the Nikola Tre and Two truck applications based upon use of multiple fuel-cell power modules utilizing the Bosch heavy-duty commercial vehicle fuel-cell stack. The fuel-cell power modules are expected to launch in 2023, with the first application being the Class 8 regional-haul Nikola Tre FCEV. Nikola anticipates that the overall vehicle design will result in a range of up to approximately 500 miles. Nikola plans to further expand capacity for use in the Class 8 long-haul Nikola Two FCEV with an anticipated range of up to approximately 900 miles.

“This announcement is the result of a multi-year working relationship with Bosch,” said Nikola CEO Mark Russell. “After extensive analysis of the best options out there, we are proud to enter into this strategic relationship with Bosch. The result is the best of both worlds in our ‘make versus buy’ analysis. We will be collaborating with Bosch to develop and assemble fuel-cell power modules specifically for our applications at the same Coolidge, Arizona facility where we manufacture our Nikola vehicles, utilizing major components from the Bosch global manufacturing network.”

Nikola plans to expand the Coolidge manufacturing facility by 50,000 sq. ft. and up to 50 additional manufacturing jobs to accommodate initial fuel-cell power module assembly by 2023, in support of the initial ramp-up of the Nikola Tre FCEV, with subsequent expansions planned to support the ramp-up of Nikola’s Tre and Two FCEVs in the US. Nikola is also expanding engineering and testing facilities to support the fuel-cell and vehicle validation and testing at Nikola’s Phoenix headquarters.

Nikola is currently building and testing Tre FCEV alpha vehicles utilizing the fuel-cell power modules from the agreements and plans to begin road testing by the end of 2021 in support of customer pilot tests.

ABOUT NIKOLA CORPORATION
Nikola Corporation is globally transforming the transportation industry. As a designer and manufacturer of zero-emission battery-electric and hydrogen-electric vehicles, electric vehicle drivetrains, vehicle components, energy storage systems, and hydrogen station infrastructure, Nikola is driven to revolutionize the economic and environmental impact of commerce as we know it today. Founded in 2015, Nikola Corporation is headquartered in Phoenix, Arizona. For more information, visit www.nikolamotor.com or Twitter @nikolamotor.

FORWARD LOOKING STATEMENTS
Certain statements included in this press release that are not historical facts are forward-looking statements for purposes of the safe harbor provisions under the Private Securities Litigation Reform Act of 1995. Forward-looking statements generally are accompanied by words such as “believe,” “may,” “will,” “estimate,” “continue,” “anticipate,” “intend,” “expect,” “should,” “would,” “plan,” “predict,” “potential,” “seem,” “seek,” “future,” “outlook,” and similar expressions that predict or indicate future events or trends or that are not statements of historical matters. These forward-looking statements include, but are not limited to, statements regarding the potential benefits of the announced agreements with Bosch; the company’s expected benefits from the fuel-cell power modules; the company’s ability to assemble fuel-cell power modules at its Coolidge, Arizona facility; the expected benefits from integrating those fuel-cell power modules in its vehicles; expectations regarding its business, business model and strategy; the company’s expectations for its trucks and market acceptance of electric trucks, both BEV and FCEV; and market opportunity. These statements are based on various assumptions, whether or not identified in this press release, and on the current expectations of Nikola’s management and are not predictions of actual performance. Forward-looking statements are subject to a number of risks and uncertainties that could cause actual results to differ materially from the forward-looking statements, including but not limited to, design and manufacturing changes and delays; failure to realize the anticipated benefits of the definitive agreements; general economic, financial, legal, regulatory, political and business conditions and changes in domestic and foreign markets; the potential effects of COVID-19; the outcome of legal, regulatory and judicial proceedings to which Nikola is, or may become a party; demand for and customer acceptance of Nikola’s trucks; risks associated with development and testing of fuel-cell power modules and hydrogen storage systems; risks related to the rollout of Nikola’s business and the timing of expected business milestones; the effects of competition on Nikola’s future business; the availability of capital; risks associated with changes in accounting treatment or accounting standards; and the other risks detailed from time to time in Nikola’s reports filed with the Securities and Exchange Commission, including its annual report on Form 10-Q for the quarter ended June 30, 2021 and other documents Nikola files with the SEC. If any of these risks materialize or our assumptions prove incorrect, actual results could differ materially from the results implied by these forward-looking statements. These forward-looking statements speak only as of the date hereof and Nikola specifically disclaims any obligation to update these forward-looking statements.