“During the first quarter, we reached a significant milestone with the start of serial production for the Nikola Tre BEV at our Coolidge, Arizona manufacturing facility and are currently delivering saleable trucks to dealers for customer deliveries,” said Mark Russell, Nikola’s Chief Executive Officer. “We look forward to scaling production and delivering 300 – 500 production vehicles to customers this year.”

Nikola Tre BEV Update
During the first quarter, the final 10 of a total fleet of 40 pre-series Tre BEVs came off the line in Coolidge, Arizona. Pre-series trucks continue to be used in customer pilots, dealer demos, and internal R&D testing. On April 29, we successfully completed our first Tre BEV customer pilot with TTSI. We also successfully completed a 14-day pilot with Univar Solutions (NYSE: UNVR). We are currently undergoing pilot testing with several other customers, including Covenant Logistics (Nasdaq: CVLG).

On March 21, 2022, we began serial production of the Nikola Tre BEV in Coolidge, Arizona. We began shipping saleable Tre BEVs to dealers in April for customer deliveries. Customer POs for 134 trucks have been issued to our dealers utilizing California HVIP. To date, we have received POs, LOIs, and MOUs for a total of 510 Nikola Tre BEVs.

Nikola Tre FCEV Program Update
Tre FCEV alpha pilot testing with Anheuser-Busch (A-B) in Southern California was successfully concluded on April 29. The Tre FCEV alphas logged over 12,000 miles in A-B operations. FCEV alpha pilot testing is scheduled to begin with TTSI by the end of May. We plan to begin building the first six beta FCEV trucks by the end of Q2 2022 and complete them by the end of Q3 2022. This first batch is expected to be followed by builds of a second batch of five and a third batch of eight beta trucks. Each beta cohort will incorporate learnings from alpha fleet testing and previous batches. Validation of the beta fleet trucks is scheduled to progress through the first half of 2023, followed by the start of serial production planned in the second half of 2023.

On April 26, 2022, TC Energy, in conjunction with Nikola, announced a plan to evaluate a hydrogen production hub in Crossfield, Alberta. The hub is expected to produce an estimated 60 tonnes of hydrogen per day, with the capacity to expand to up to 150 tonnes per day. Nikola is intended to serve as TC Energy’s anchor customer for the hub.

Announced Finance Agreement with ENGS Commercial Finance Co.
On March 29, 2022, we signed an agreement with ENGS Commercial Finance Co. to facilitate the sale of Class 8 Nikola Tre BEVs and FCEVs. Working directly through the Nikola dealer network, ENGS will offer a broad range of customer finance solutions for the purchase of Nikola vehicles, charging assets, and infrastructure requirements.

Strengthened Leadership Team and Board of Directors
On February 22, 2022, Michael Lohscheller was named President of Nikola Motor division, reporting to CEO Mark Russell. On February 24, 2022, Lynn Forester de Rothschild of Inclusive Capital Partners was appointed to the Board of Directors, replacing Jeff Ubben.

$200 Million Senior Notes Investment
On May 2, 2022, we announced a $200 million investment from funds advised by Antara Capital. The investment comes in the form of a senior unsecured note bearing interest of 8% if paid in cash, and 11% if paid by the issuance of additional notes. The notes will mature in May of 2026. We expect the note to fund in early June 2022.

Webcast and Conference Call Information
Nikola will host a webcast to discuss its first-quarter results at 6:30 a.m. Pacific Time (9:30 a.m. Eastern Time) on May 5, 2022. To access the webcast, parties in the United States should follow this link: https://www.webcast-eqs.com/register/nikola20220505/en.

Forward-Looking Statements
This press release contains certain forward-looking statements within the meaning of federal securities laws with respect to Nikola Corporation (the "Company"), including statements relating to the Company's future performance and milestones; expected timing of manufacturing facility expansion and production capacity; timing of completion of testing, production, as well as other milestones; expectations regarding the trucks’ uses and impact; and terms and potential benefits of the planned collaborations with its strategic partners. These forward-looking statements generally are identified by words such as "believe," "project," "expect," "anticipate," "estimate," "intend," "strategy," "future," "opportunity," "plan," "may," "should," "will," "would," and similar expressions. Forward-looking statements are predictions, projections, and other statements about future events based on current expectations and assumptions and, as a result, are subject to risks and uncertainties. Many factors could cause actual future events to differ materially from the forward-looking statements in this press release, including but not limited to: design and manufacturing changes and delays, including global shortages in parts and materials; general economic, financial, legal, regulatory, political and business conditions and changes in domestic and foreign markets; the potential effects of COVID-19; the outcome of legal, regulatory and judicial proceedings to which the Company is, or may become a party; demand for and customer acceptance of the Company’s trucks; the results of customer pilot testing; the execution and terms of definitive agreements; risks associated with development and testing of fuel-cell power modules and hydrogen storage systems; risks related to the rollout of the Company’s business and the timing of expected business milestones; the effects of competition on the Company’s future business; the availability of and need for capital; and the factors, risks and uncertainties regarding the Company's business described in the "Risk Factors" section of the Company's annual report on Form 10-K for the year ended December 31, 2021 filed with the SEC, in addition to the Company's subsequent filings with the SEC. These filings identify and address other important risks and uncertainties that could cause the Company's actual events and results to differ materially from those contained in the forward-looking statements. Forward-looking statements speak only as of the date they are made. Readers are cautioned not to put undue reliance on forward-looking statements, and, except as required by law, the Company assumes no obligation and does not intend to update or revise these forward-looking statements, whether as a result of new information, future events, or otherwise. 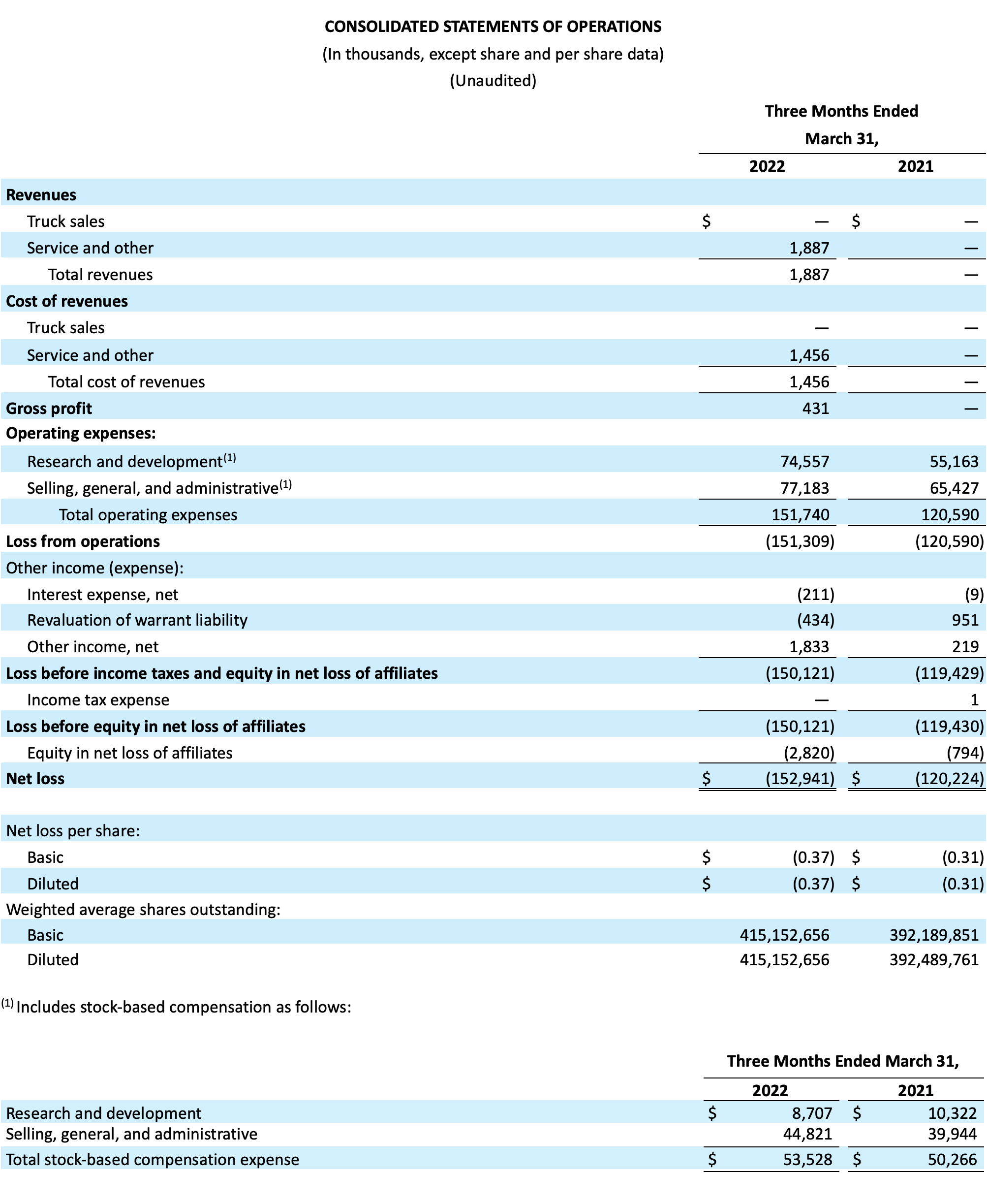 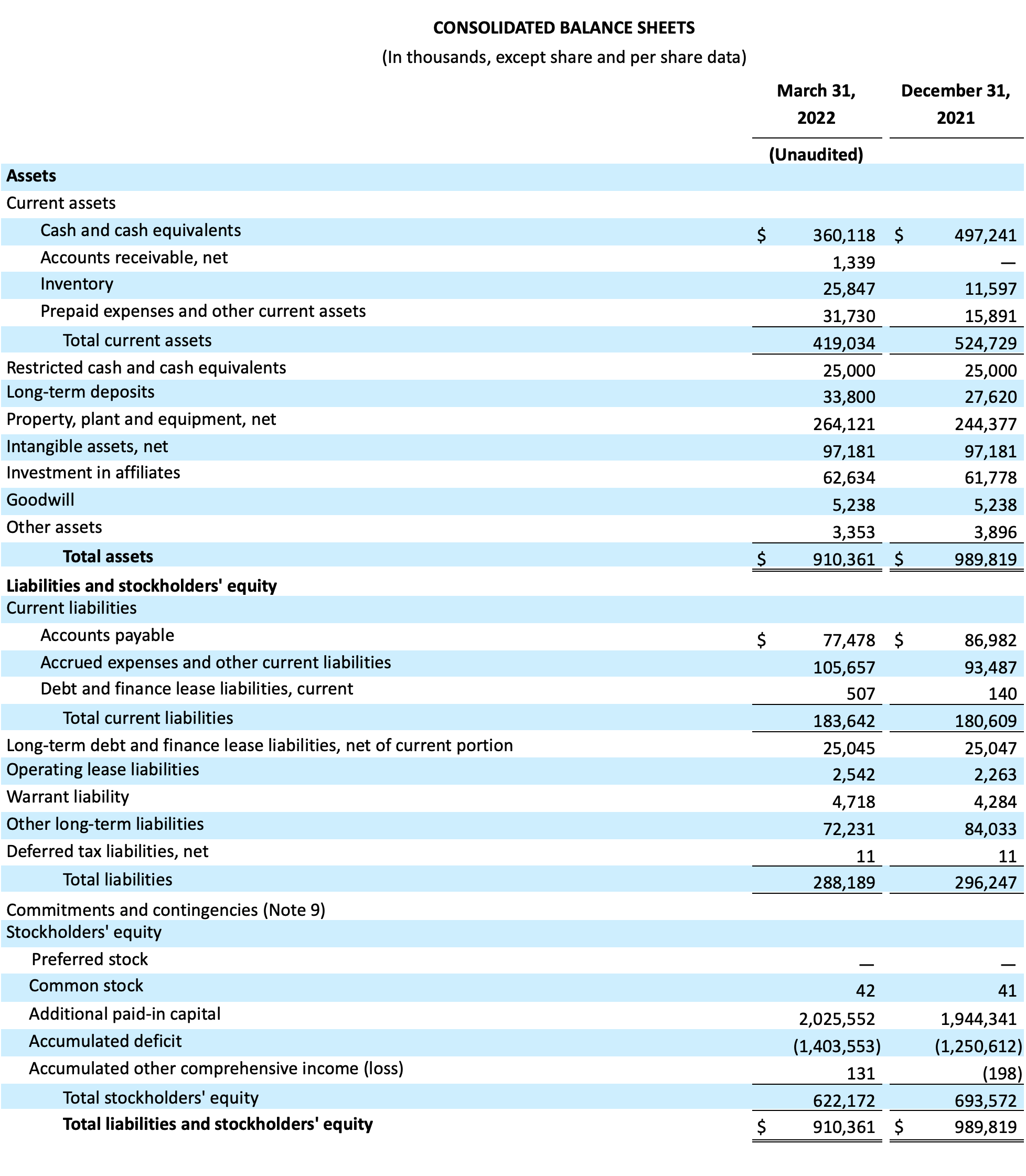 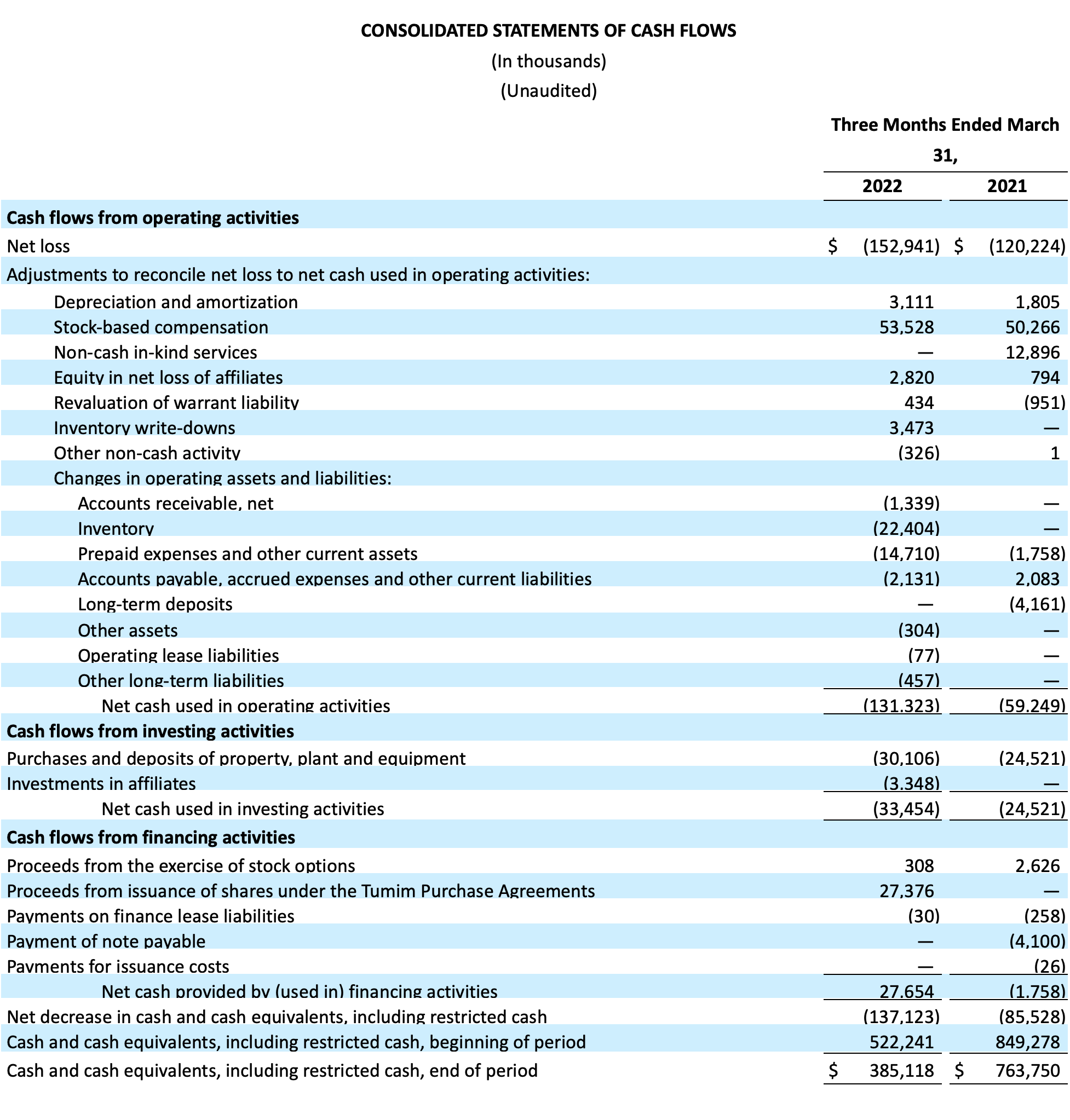 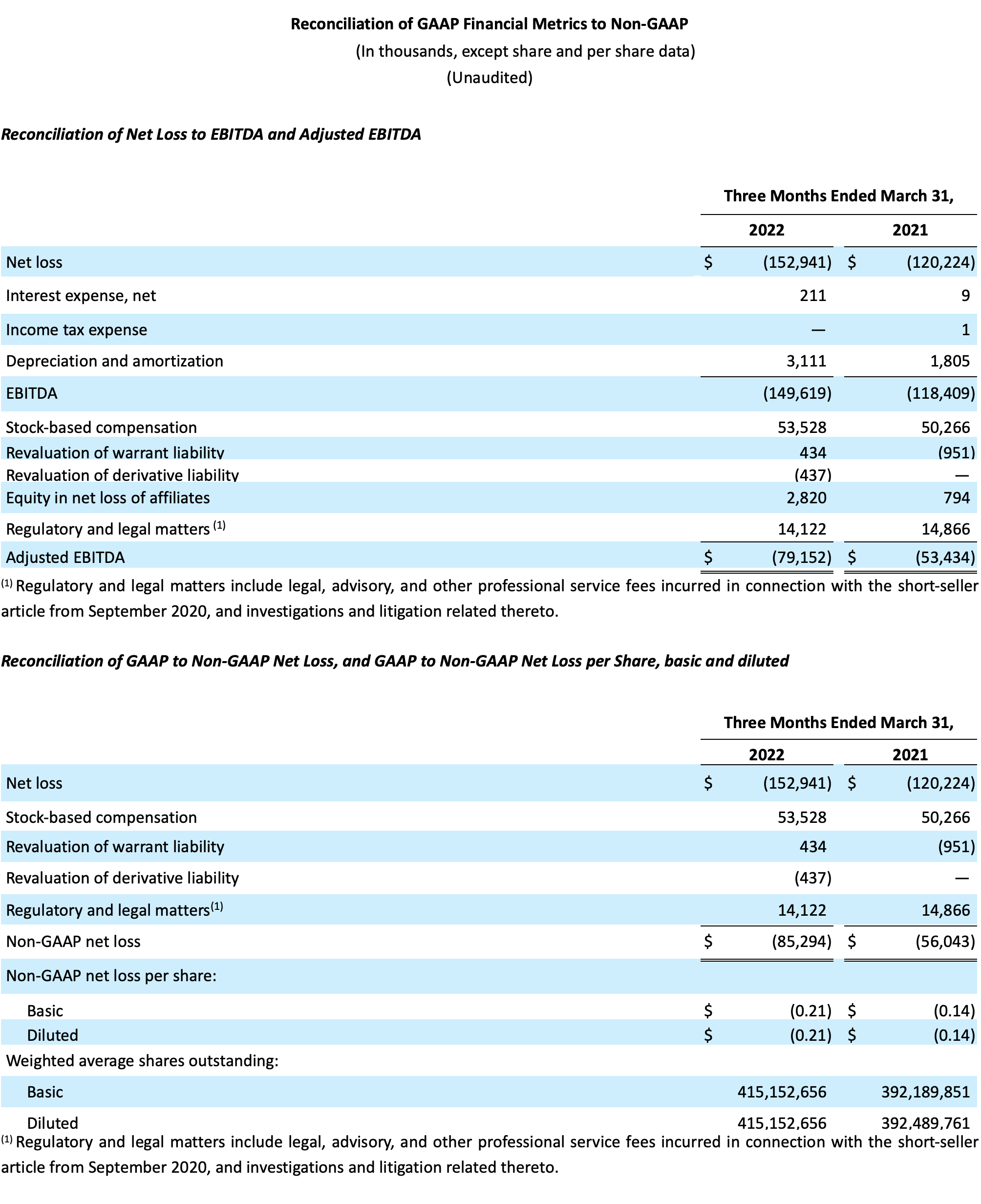 
1. “HVIP” stands for California’s Hybrid and Zero-Emission Truck and Bus Voucher Incentive Project which allows for up to $150,000 towards the purchase of qualifying vehicles.