"During the second quarter Nikola continued to pave the way and solidify our place as a global leader in zero-emissions transportation solutions,” said Mark Russell, Nikola's Chief Executive Officer. “We have had continued success in commissioning and validating the Nikola Tre BEVs, completed both our Ulm, Germany and Phase 0.5 of our Coolidge, Arizona manufacturing facilities, entered into a purchase agreement with Tumim Stone Capital LLC for up to $300 million of Nikola common stock, and acquired a 20% stake in the Wabash Valley Resources clean hydrogen project in West Terra Haute, Indiana.”

Our team continues to work diligently with suppliers to offset the global parts and materials shortage, as well as work to grow the parts maturity level as we ramp up pre series builds.

As of today, Nikola has completed Phase 0.5 of our Coolidge, Arizona manufacturing facility and is in the process of building seven (7) trucks in Coolidge, comprised of two (2) Tre BEV Pre Builds and five (5) Tre FCEV Alphas. As we are building trucks in Phase 0.5 of the facility, we are concurrently building out the Phase 1 assembly expansion area which will provide additional manufacturing capacity. We anticipate the Phase 1 assembly expansion area will be completed by the end of 2021.

Progress Made at our Joint Venture Manufacturing Facility on IVECO's Industrial Complex in Ulm, Germany

On June 14, Nikola and IVECO started trial production on the assembly line in Ulm, Germany. There are currently two Nikola Tre BEV Pre Builds on the line being assembled. The equipment and assembly process are being fine-tuned as we ramp up for serial production.

On June 22, Nikola acquired a 20% equity interest in Wabash Valley Resources LLC (WVR), a clean hydrogen project being developed in West Terra Haute, Indiana in exchange for a $54.1 million cash and stock consideration. The project plans to use solid waste byproducts such as petroleum coke combined with biomass to produce clean and sustainable hydrogen. As part of the agreement, Nikola acquired the right to offtake up to 20% of the clean gaseous hydrogen produced at the facility at the anticipated price of less than $1.00 / kg*.

The offtake agreement with WVR could provide Nikola with approximately 50 tons of hydrogen per day following completion of the plant. This would allow us to supply clean hydrogen in a critical geography.

On June 11, Nikola entered into a common stock purchase agreement with Tumim Stone Capital LLC (Tumim), obligating Tumim to purchase up to $300 million of Nikola common stock. Under the agreement, Nikola has the right, but not the obligation to sell shares of its common stock to Tumim, subject to certain limitations. Purchase notices may be issued to Tumim over the period commencing from the date of the purchase agreement and ending on the first day of the month following the 36 months anniversary. The shares will be issued at a 3% discount to the three-day forward volume weighted average price (VWAP) from the date a purchase notice is issued.

This allows us to sell shares to Tumim at our sole discretion and provides us with additional liquidity to execute on our business plan.

Expansion of Sales and Service Network

On July 15, Nikola announced the expansion of our sales and service network adding 51 locations across Texas, Arizona, California, Colorado, New Mexico, Florida, Delaware, Virginia, and Maryland. In conjunction with the RIG360 announcement this past April, this expansion is anticipated to bring our total number of U.S. sales and service locations to 116.

Nikola looks forward to achieving the following milestones in the second half of 2021:

Nikola will host a webcast to discuss its second quarter results at 6:30 a.m. Pacific Time (9:30 a.m. Eastern Time) on August 3, 2021. To access the webcast, parties in the United States should follow this link: https://www.webcast-eqs.com/nikola20210803/en.

Nikola Corporation is globally transforming the transportation industry. As a designer and manufacturer of zero-emission battery-electric and hydrogen-electric vehicles, electric vehicle drivetrains, vehicle components, energy storage systems, and hydrogen station infrastructure, Nikola is driven to revolutionize the economic and environmental impact of commerce as we know it today. Founded in 2015, Nikola Corporation is headquartered in Phoenix, Arizona. For more information, visit www.nikolamotor.com or Twitter @nikolamotor.

This press release contains certain forward-looking statements within the meaning of federal securities laws with respect to Nikola Corporation (the "Company"), including statements relating to the Company's future performance; expected timing of manufacturing facility buildout in Coolidge, AZ and Ulm, Germany and production capacity at such facilities; expectations regarding the Company's hydrogen project with WVR, including timing, supply quantity and cost; timing of completion of prototypes, validation testing, volume production, buildouts as well as other milestones; expectations regarding the Company’s sales and service network; the company’s expectations regarding use of the Tumim equity line of credit facility and dilution to stockholders; and terms and potential benefits of the planned collaborations with WVR, Rig360 and IVECO. These forward-looking statements generally are identified by words such as "believe," "project," "expect," "anticipate," "estimate," "intend," "strategy," "future," "opportunity," "plan," "may," "should," "will," "would," and similar expressions. Forward-looking statements are predictions, projections and other statements about future events that are based on current expectations and assumptions and, as a result, are subject to risks and uncertainties. Many factors could cause actual future events to differ materially from the forward-looking statements in this press release, including but not limited to: design and manufacturing changes and delays, including global shortages in parts and materials; general economic, financial, legal, regulatory, political and business conditions and changes in domestic and foreign markets; the potential effects of COVID-19; the outcome of legal, regulatory and judicial proceedings to which the Company is, or may become a party; demand for and customer acceptance of the Company’s trucks; risks associated with development and testing of fuel-cell power modules and hydrogen storage systems; risks related to the rollout of the Company’s business and the timing of expected business milestones; the effects of competition on the Company’s future business; the availability of and need for capital; and the factors, risks and uncertainties regarding the Company's business described in the "Risk Factors" section of the Company's annual report on Form 10-K for the year ended December 31, 2020 filed with the Securities and Exchange Commission (the "SEC"), as amended, in addition to the Company's subsequent filings with the SEC. These filings identify and address other important risks and uncertainties that could cause the Company's actual events and results to differ materially from those contained in the forward-looking statements. Forward-looking statements speak only as of the date they are made. Readers are cautioned not to put undue reliance on forward-looking statements, and, except as required by law, the Company assumes no obligation and does not intend to update or revise these forward-looking statements, whether as a result of new information, future events, or otherwise.

Use of Non-GAAP Financial Measures 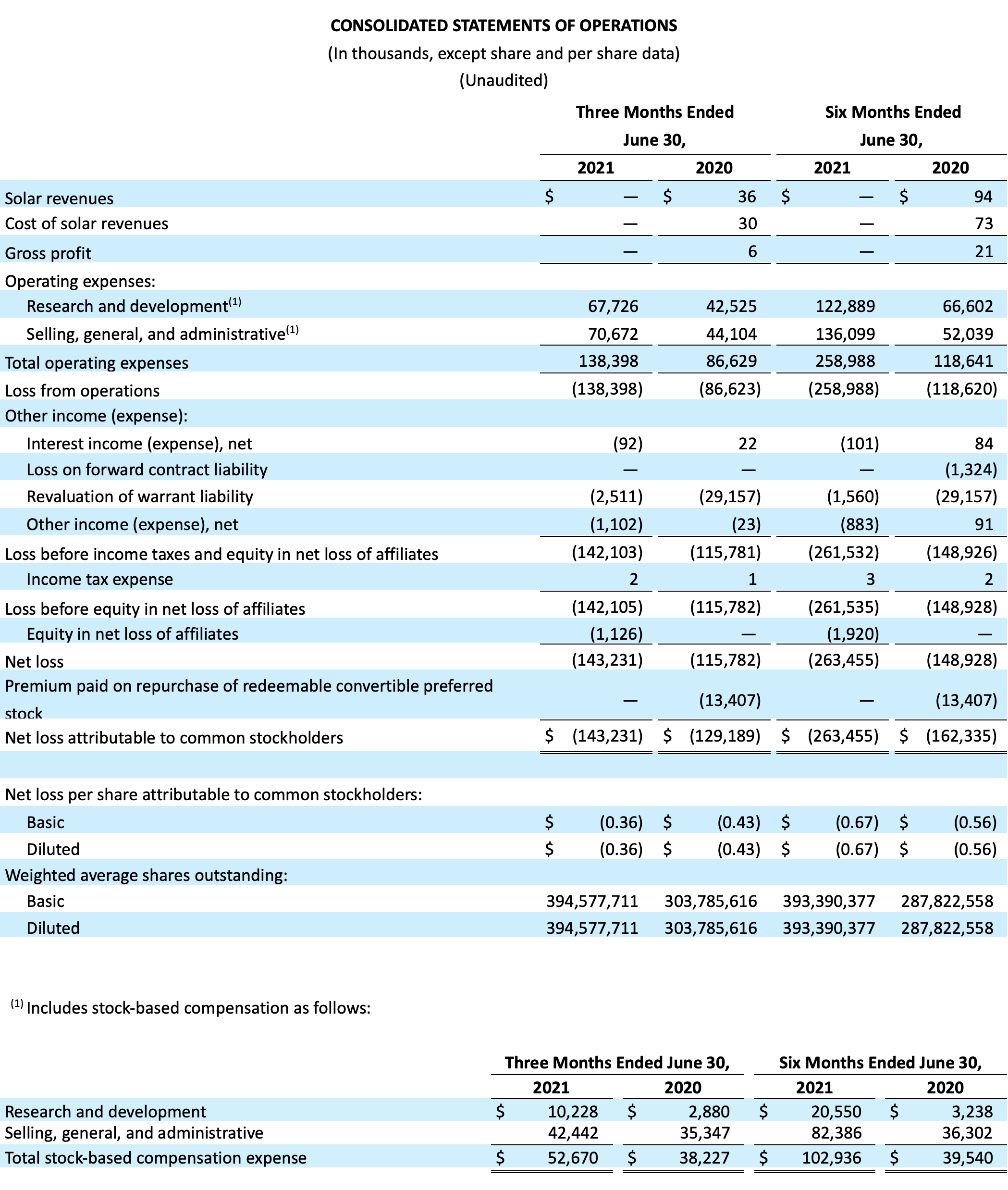 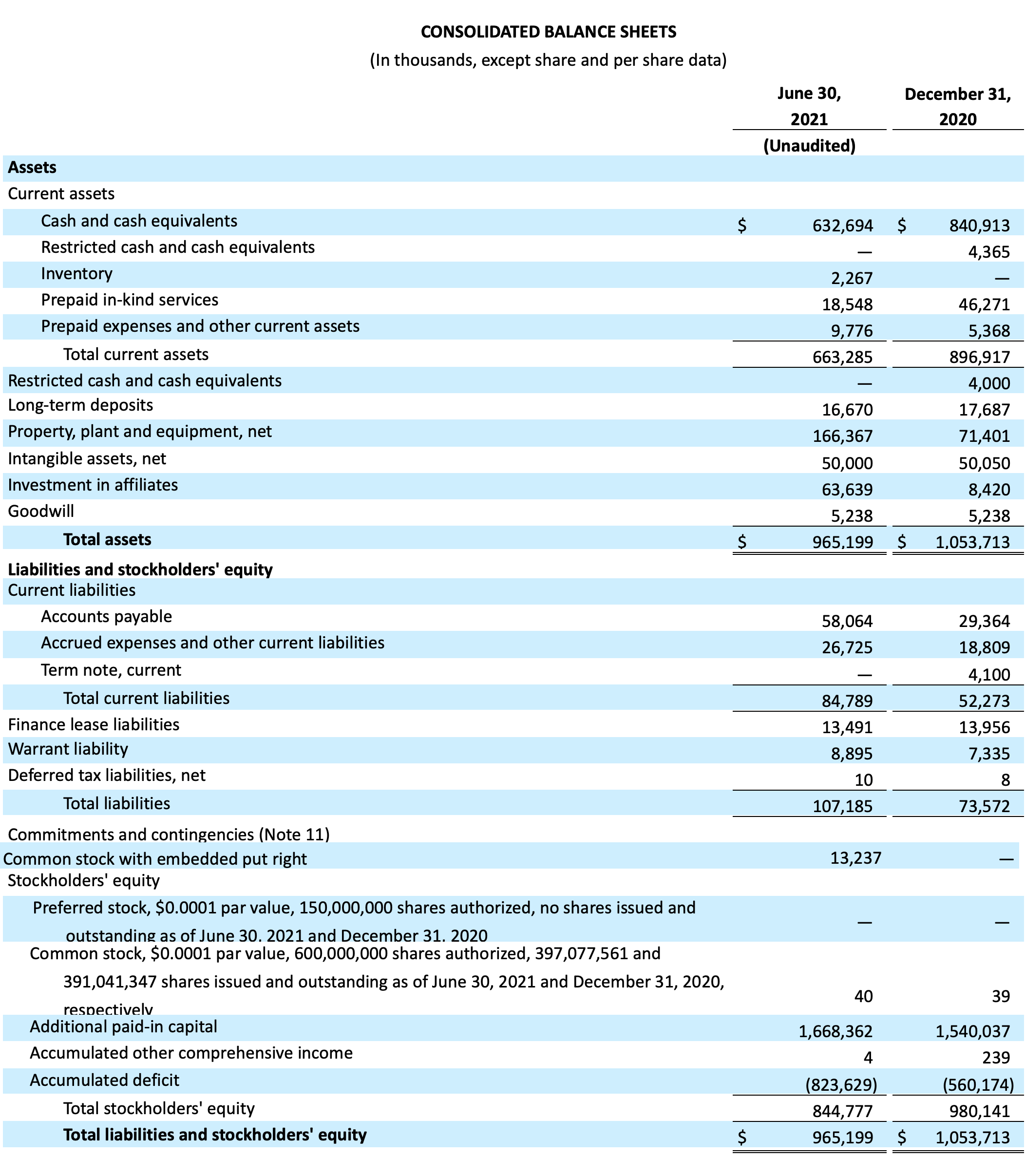 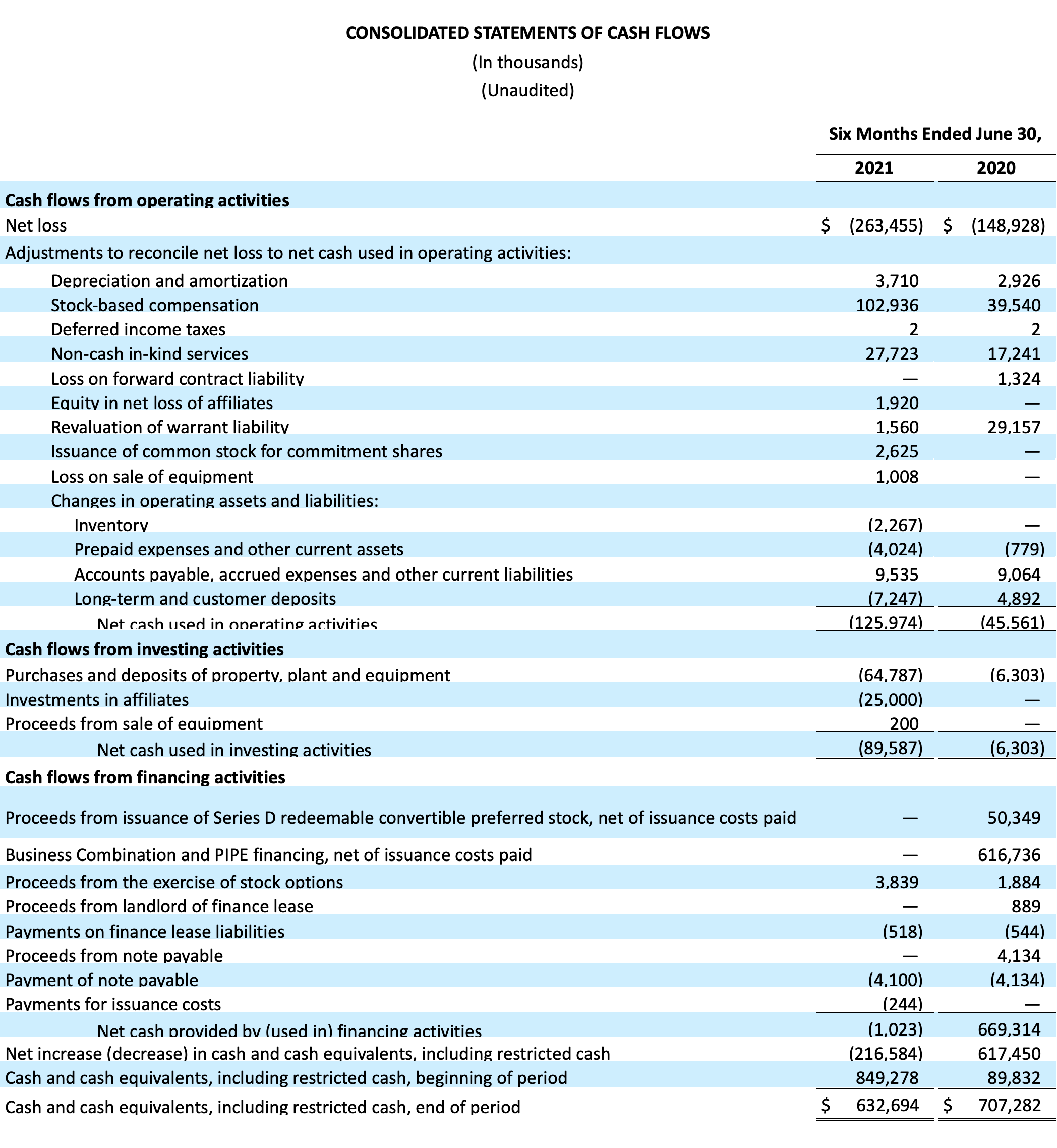 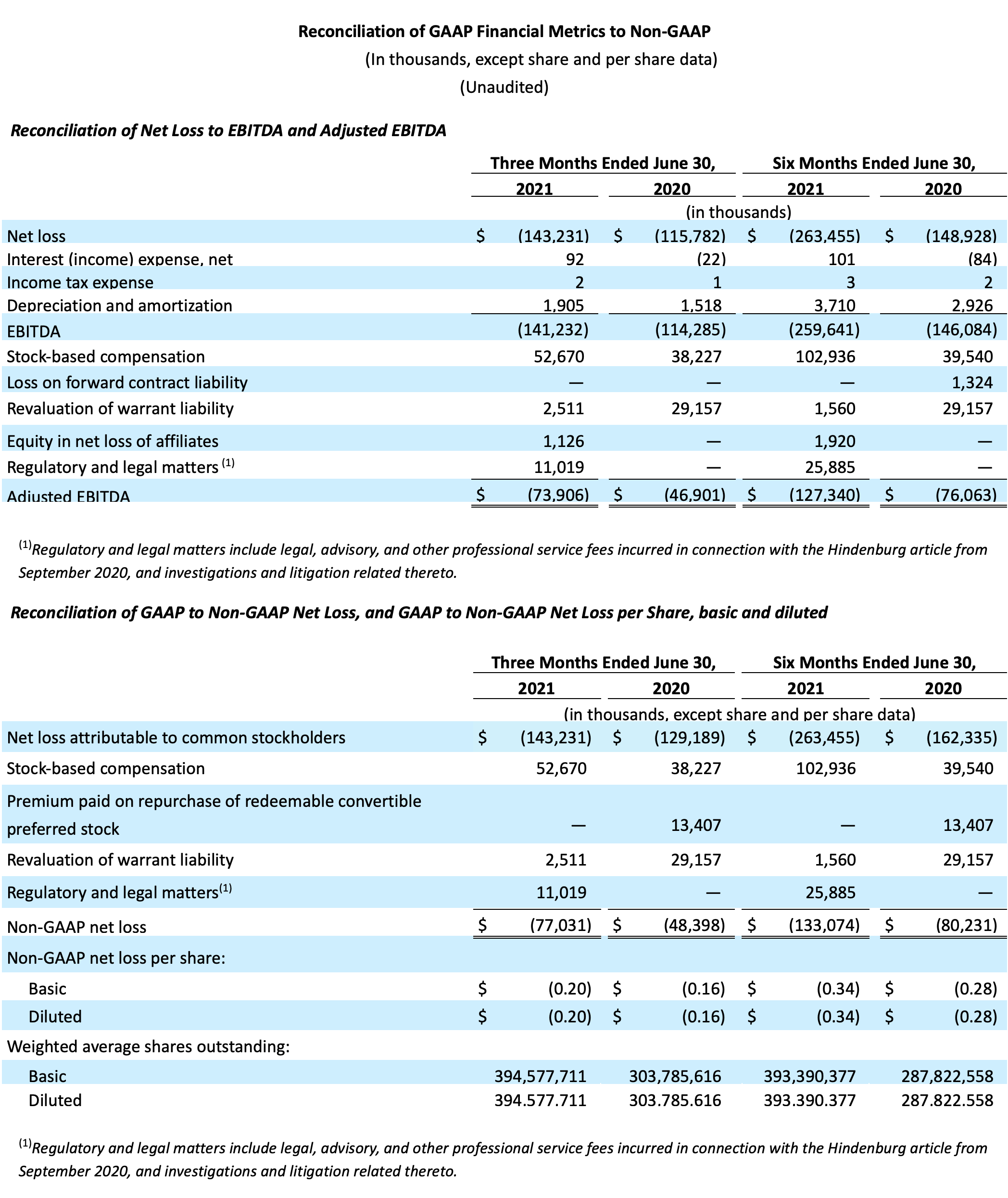 * The price of under $1.00/kg is a management estimate based on variety of key assumptions; represents anticipated price of hydrogen off-take by Nikola and does not include the cost and capital investment necessary to support Nikola fueling infrastructure needs.